Collaboration within a class, and between classes, using Lino and Smartboard

I have been experimenting with lino, a free web based tool for creating and sharing notice boards. You can create an account at (linoit.com) or there is an app, but going through a browser avoids the scrolling advert.

I thought it might be a useful way to help students to work co-operatively, and discovered some dos and don’ts that might help other teachers. My first problem is probably particular to my college – I discovered that the app was blocked so that the students couldn’t upload it to their (college) iPads, and that the sign-in page on Safari was faulty. So with my first class of 14-year-olds I had to revise my plans quickly and I invited them all to contribute to one public board. It turned out that many of them thought Shrek had some good ideas about comparing light bulbs. So we celebrated their success in posting, moved on, and their (extra) evening task was to open an account for themselves. They did this successfully, and used the web links and tasks I had put on the first board to start their research in the next lesson.  (The students chose who to work with and spent 30 minutes composing a board).

I gave them some feedback and pointers for improvement , as you can see on the yellow stickie. 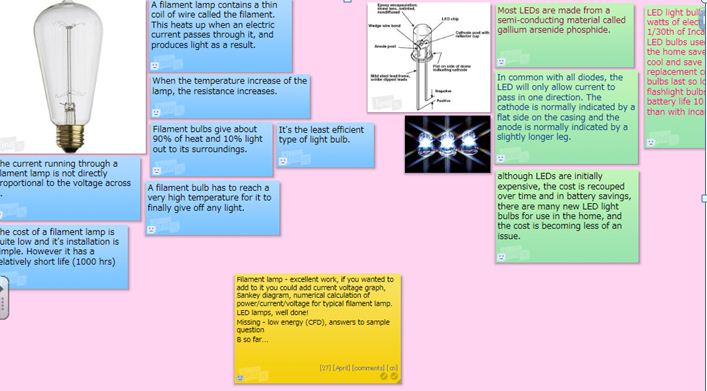 The class then had a full Evening School assignment to complete the work. My big criticism is that there is a great deal of cut and paste without attribution. Although the task increased co-operation and gave students an opportunity to backed previous experimental work with exemplars from the real world, little critical thought went on.  I included one structured question to answer, I realise I should have put in more demanding, higher level tasks like this, as well as the ‘contents list’ that they started with, in order to encourage higher level thinking.

The next board was a response to a different task. The Advancing Physics course has a pre-release paper. I chose words from the first paragraph and asked students to compose sentences to show they understood the meaning in the context.

After 15 minutes of composition, I sent students the link to the board, with the words on it, and asked them to post their sentences. We could then add corrections and comments on the SmartBoard to think about whether the sentences used the word correctly, and if they made its meaning clear. I have a large number of ESL students in some classes, and all the students were involved in critical thinking, as they judged the sentences.

What next? Students from other classes can be permitted to look at boards – maybe without permission to post notes. I’ll print the best boards for the notice board outside the classroom. Students have been collaborating while physically in different houses, perhaps we can spread that further?

Teacher in Southern England enthusiastic about exploring ways to learn and teach, and evangelistic about sharing them. Specialism is Physics, but that's just a useful starting point.
View all posts by lifelonglearner →
This entry was posted in education and tagged assessment for learning, collaboration, education, lino, smartboard. Bookmark the permalink.