Steve Wheeler (Learning with e’s) recently posted a link to a blog he wrote a couple of years ago about Bloom’s taxonomy. This got me thinking how Bloom’s pyramid linked to the different methods we use to analyse digital teaching and learning, and in particular, how I proceed when I’ve learned a new app, or digital technique (or any new wrinkle to improve teaching and learning in my classroom). The following doodle emerged from several mornings thought as I drove to work: 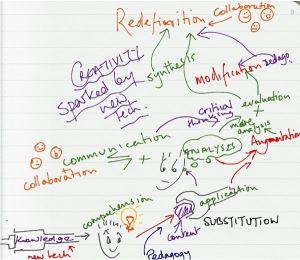 First comes an injection of knowledge of some new digital technique or device. Comprehension leads me to use my pedagogical knowledge, and apply the technique to help teach some content for which I think it may be appropriate. I’ve invoked TPACK concepts (see below), but I’ll also concede that at this stage I am probably only substituting a digital technique for a previous method (SAMR, notes on this below too). Reflection and analysis, with some communication and collaboration (from students or colleagues) will hopefully lead to Augmentation, so that the results of using the new tool are better than those with previous teaching methods. More collaboration and communication, combined with critical thinking and evaluation should lead to Modification of the original task. Leading to the peak of Bloom’s taxonomy where all the previous inputs are synthesised and in a burst of creativity the original task is redefined and re-imagined to produce results that were impossible to achieve previously.
A practical example: For some years I’ve encouraged students to photograph experimental set ups to help them remember and record what they have done (substitution for traditional science diagrams). Students moved on to analysing their photgraphs to make more precise measurements than they could in the course of the experiment (Augmentation). Then students chose to video experiments so that they could analyse transient phenomena (Modification), and then by employing apps such as SloPro they realised they could plan and carry out investigations that they had not considered possible before.
I’ll save other examples for future blogs – here are some notes on the acronyms in the title. SAMR was devised by Ruben Puentedura as a way of describing adoption of digital technology. At first Substitution, then Augmentation, followed by Modification of the task and finally Redefinition with creation of new tasks. I usually think re-imagination here. TPACK – a Venn diagram of technology, pedagogy and subject content knowledge, the best learning and teaching happens where the three circles intersect. And the four Cs – collaboration, communication, critical thinking and creativity – which need some Content, I think, to be valuable. For Bloom’s taxonomy – I refer you to Steve Wheeler’s two blogs!

Teacher in Southern England enthusiastic about exploring ways to learn and teach, and evangelistic about sharing them. Specialism is Physics, but that's just a useful starting point.
View all posts by lifelonglearner →
This entry was posted in education and tagged Bloom's Taxonomy, education, four Cs, SAMR, TPACK. Bookmark the permalink.