Visiting Chanctonbury Ring can form part of a longer walk, but if you only have 1 ½ to 2 hours to spare there is a convenient car park on the lane South of the A283, a mile or so East of Washington roundabout, opposite Water Lane that leads  to Wiston. For 25 years I drove to work past Wiston Post Office, and always felt compelled to check it was still standing. I learned a long time ago that you should not design a house with windows at the edges, brick or stone was necessary (before recent developments in strengthened glass) to support the building. I am delighted to say that the cottage, several centuries old, has not collapsed despite the windows at the North East corner of the building that worried me. Sadly the teashop based there has now closed.

All Saints Church, Buncton is just South of the post office, with a parking lay-by on Water Lane. It is a tiny chapel of ease, almost 1000 years old. There is a narrow path through the trees, so that a visitor can move back through centuries as she approaches the building, to absorb the mixture of Saxon and Norman construction and decoration. Sadly, again, a unique carving has been erased in this century – after surviving for eight of those preceding ours.

But we have crossed to the South of the A283 then driven a kilometre or so up the narrow lane to the car park on the left. As we walked South we crossed the East-West track that runs along the North base of the Downs. To our left this track has huge iron gates with an impressive one for pedestrians at one side. We went on and started to climb past the reservoir and through the woods. This is a slippery path in the winter, I remember climbing it one afternoon when the children were young. When we came down again, in the dusk, we could hear owls hooting all around us – above and below, as the wooded slopes fell away. I maintained a matter of fact commentary to reassure the children, and hid my relief when we re-joined the wider track. When I read Robert Macfarlane’s account of camping at Chanctonbury Ring, and being disturbed by what he feared were ghosts I sympathised, then laughed when in a later book he wrote that the sounds were probably made by owls.

The atmosphere on a summer afternoon was very different. The spaniel and I met other walkers, enjoyed the dappled light through the trees and emerged to sunny pastures and blue skies. We turned right, following the South Downs Way to approach the ring. After the last gate, and a check that there were no sheep grazing about the ring, I released the dog and walked across the open grassland towards the ring of trees. It is nearly thirty years since the great storm that flattened so many of the beeches planted by Charles Goring in 1760. The trees that were planted to replace the casualties have grown to restore the outline we remember. Many of the fallen trees were left as nurse logs, and reminded us that trees are not immortal. The storm hastened the downfall (oops!) of thousands of trees in the South East, but that action did not destroy creations that would have lived for ever.

When I walked round the outside of the tree clump, the spaniel ran Spirograph circles, Ptolemaic secondary orbits based on my circuit of the ring. Overheated as we left the summit, she noticed the cattle trough at the top of the next rise and charged towards it. Standing up on her hind legs, with her forepaws on the rim while she reached to lap the water was not cooling enough. Suddenly the dog had scrambled into the trough and was swimming (doggy paddle of course) with just her head above the water.

We walked back down through the woods, the dog drying slowly, and paused to visit a favourite tree. The tree grows on a bank that has washed away, so that its roots are exposed. It resembles Yggdrasil, I expected to see the Norns weaving our fates but there are only the ashes of a campfire. 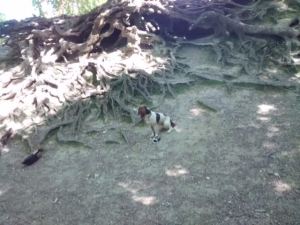 Teacher in Southern England enthusiastic about exploring ways to learn and teach, and evangelistic about sharing them. Specialism is Physics, but that's just a useful starting point.
View all posts by lifelonglearner →
This entry was posted in walks and tagged Chanctonbury, walk, West Sussex, Wiston. Bookmark the permalink.